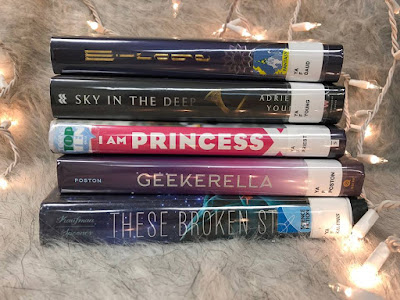 Without a doubt, the Young Adult section is my go-to section of the library. So it’s no wonder that my top 5 would be anything less. This past year I re-read and discovered a lot of Young Adult books, but narrowing it down to my top five was easy. Of this list, 2 books were written by debut authors of 2018, 1 was a 2016 Teens Top Ten nominee, 1 is a contemporary retelling of a beloved fairy tale and the last is one of the most exciting space opera’s I’ve ever read. Here's my list!

I AmPrincess X  by Cherie Priest
May and Libby, 2 best friends invented the comic Princess X one day on the playground. Libby would draw the pictures while May came up with the stories. When Libby is in a car wreck a few years later (her body never recovered), Princess X comes to an end. But when Princess X suddenly reappears online, May is determined to find out what’s going on and discovers that maybe Libby’s accident wasn’t an accident at all.
MIDDLE GRADE

Sky In TheDeep  by Adrienne Young
Eelyn was raised to be a Viking warrior to fight alongside her Aska Clan. During a battle against the rival Riki Clan, she comes across the ghost of her brother who she saw fall to his death 5 years prior. While searching for answers surrounding her brother’s accident, she gets taken by the Riki Clan and must find a way survive a winter in the mountains with them until she can return to the Aska.
YA

Mirage   by Somaiya Daud
This is a dystopian fantasy with a beautiful Mesopotamia setting! On an evening of celebration in Amani’s village, Imperial droids kidnap Amani and take her to the royal palace where she will become the body double for the Princess Maram, who is loathed by her people. This book is #1 of a trilogy, with book #2, Court of Lions, coming out August 2019
YA

Geekerella  by Ashley Poston
In this contemporary retelling of the classic Cinderella, Elle immerses herself in Starfield, a fandom she shared with her late father. Hollywood heartthrob Darien has just landed the main role in the tv show reboot. Through a strange circumstance, the two strangers begin communicating with each other and a friendship quickly blossoms. This all leads up to the ExcelsiCon Cosplay Ball, where the first prize winner receives an invitation to meet Darien Freeman in person.
YA

These Broken Stars   by Amie Kaufman and Megan Spooner
Lilac LaRoux and Tarver Merendsen are two polar opposites. She’s the wealthiest heiress in the universe and he’s a poor boy turned war hero. When their spaceship Icarus is thrown out of hyperspace, the two are thrown into the same escape pod and must survive on an alien planet until help arrives.
YA